We Are Human, We Are Free is a worldwide nonviolent resistance movement to free ourselves from elite control and resist the forces of fear and dehumanisation.

Our aim is to build a mass civil resistance movement to undermine the power of the Global Elite to control us, and to regain the freedoms that make our lives worth living. Because we are human, we are free to make choices. The time has come to choose – are we on the side of love, life and freedom or fear, self-imprisonment and tyranny?

Will you wear an orange ribbon, armband or scarf to show your solidarity with the movement? 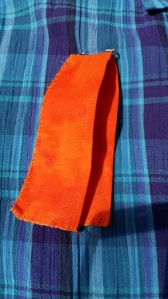 Even if you are still choosing to wear a mask at work or while shopping, wearing the orange will help you connect with others who feel as you do, so that you can find support and begin to work together to take powerful and effective collective action.

WHAT IS HAPPENING IN OUR WORLD?

Do you have a gut feeling that there is something ‘wrong’ with the way this supposed pandemic is being presented, and with planetary wide lockdowns as a response? Are you being negatively impacted by lockdowns, or vaccines, in ways that make you feel the ‘cure’ is worse than the original ‘problem’? If what is going on doesn’t make sense to you, is there another, reasonable way to explain what is happening?

WHAT IS THE GREAT RESET AND WHO IS DRIVING IT?

WHAT CAN WE DO? WHY CHOOSE NONVIOLENT RESISTANCE?

We Are Human, We Are Free recognises that to defend our human needs and rights it is necessary to noncooperate with the forces of fear, and this involves many types of courageous and conscientious individual and collective action. While legal and political challenges within the system help raise awareness of the unhealthy nature of tyranny, we need to trust ourselves to make the final decisions about how to meet our own needs when existing political and legal systems are corrupted and fail. When we cannot defend ourselves according to legal or conventional political rules, we must step outside these rules and draw upon the more natural and fundamental powers of human solidarity, conscience and courage.

Some powerful acts of nonviolent noncooperation, such as boycotts, will remain legal and risk free. Increasingly, however, noncooperation will require civil disobedience, as the forces of fear attempt to reign us in ever more tightly. The Global Elite and their agents have already used arrests, fines, imprisonment, psychiatric committal, property seizure and direct violence against pro-freedom activists in different countries to try to intimidate us into giving up. They will continue to use violence against us. In these challenging circumstances, nonviolent processes and interactions provide the greatest degree of physical and psychological/emotional safety possible for activists and will help build the greatest number of participants in our growing movement.

We recognise the crucial role of justified anger in motivating us all to stand up for ourselves and take action. This anger needs to be felt and expressed in a safe space. However, violence and aggression during actions on the part of pro-freedom activists is most likely to increase the violence of the Elite response, justify their use of violence against us in the eyes of the general public, and make potential allies less inclined to become involved.

We Are Human, We Are Free therefore recognises the right of people to defend themselves against oppression using individual or organised violent methods if they feel they have no other option. However, we believe that nonviolent resistance is a more inclusive, effective and powerful option for collective self-defence.

People taking action under the We Are Human, We Are Free banner therefore agree to maintain the following nonviolent code of conduct in their actions and campaigns:

• I will speak the truth and, if organising an action, inform both attending activists and relevant police/security/military personnel of the precise action program.
• I will treat each person (including workers, police/military officers and media personnel) with respect.
• I will withstand the anger and assaults of my opponents without retaliating with verbal aggression, physical struggle or violence.
• I will protect opponents and police/military personnel from insults and attack.
• I will act in accordance with the decisions and planned program of the organizing group and will respond promptly to requests from the action focalizers. In the event of a serious disagreement, I will withdraw from the action. I will not initiate or participate in any spontaneous action.
• I will accept responsibility for my actions; I will not use secrecy.
• If my arrest is sought, I will accept it voluntarily; if I am taken prisoner, I will behave in an exemplary manner.
• I will protect the property of my opponents and police/military personnel.
• I will not run, use any threatening motions or seek to spread panic among the activists.
• If I film or photograph a nonviolent action, I will do so for general media and security purposes only, and not target individual police/military personnel specifically for identification and intimidation.
• I will not bring or use any drugs or alcohol.

We Are Human, We Are Free invites people to participate in We Are Human, We Are Free actions and campaigns on the basis that they accept the nonviolent code of conduct for the duration of their participation. People not abiding by the code will be asked to leave or, if possible, supported to change their behaviour so that they can continue to participate. In this way we can defend ourselves against provocateurs and propagandist media who may wish to have the general public perceive us as violent. We are also modeling the world we envisage.

This video by William Twigg was taken on 14 March 2021 at a shopping centre east of the city of Melbourne in Victoria, Australia. Note the way this nonviolent action (street theatre), organized by former police officer Ed Gilbert and fellow concerned citizens of the Police for Freedom group in Victoria, was carefully crafted to invite people to think about their ‘reasonable concerns’ without distraction by tangential acts.

Everyone is welcome to take action under the We Are Human, We Are Free banner if they agree with the three fundamental points that unify this movement:

1. That whatever the level of illness occurring in the community, and whatever its causes, there is no genuine evidence of the existence of a contagious pandemic that is killing statistically significant numbers of people, and therefore no justification for any of the measures which are supposedly a response to this ‘crisis’.

2. That the false pandemic is one tool being used by the Global Elite to achieve The Great Reset, which is designed to gain total control over the world’s natural resources and the entire human population. The various elements of The Great Reset must be collectively resisted if we are to gain back the freedoms that make our lives worth living.

3. All participants in this movement are willing to abide by the nonviolent code of conduct detailed above in their campaigns.

We hope to build an easily recognisable worldwide movement against Elite dictatorship, which will unite us as we enact the many locally organised nonviolent campaigns necessary to win back our freedom.

Many nonviolent actions and campaigns are already occurring – we invite local campaigns to consider adding the We Are Human, We are Free banner to their existing identities as a worldwide unifying element in their campaign.

We will continue to connect and liaise with others in the pro-freedom movement who have chosen other means of struggle – we are all trying to achieve similar ends, even if the focus for this campaign is grassroots nonviolent action, rather than legal or conventional political action.

DIVERSITY WITHIN THE MOVEMENT

There are a number of issues which could be considered contentious amongst people engaged in this movement. For example, some people believe that the virus has never been isolated and proven to cause acute respiratory symptoms [see a concise scientific explanation here: ‘Statement On Virus Isolation (SOVI)’] and that there are other explanations for the illness and deaths that have occurred. Others believe the virus exists but is not causing enough deaths to be considered a pandemic [see, for example, articles on unscientific PCR tests – ‘Scientists show COVID tests are “useless”, are based on “flawed science”’ and ‘PCR test revelations from official literature; they expose their own lies’ and manipulation of death statistics here: ‘Covid 19 Is A Statistical Nonsense’]. Whatever our views on the virus, we all agree that paranoia regarding ‘asymptomatic carriers’ (ie. healthy people), lockdowns, isolation, masks, social distancing, obsessive disinfection and experimental injectables (‘vaccines’) are not means by which genuine community health can be achieved.

Some people engaged in this movement see the attempted Elite takeover as a purely ‘physical world’ problem, while others interpret what is happening according to their religious or spiritual beliefs.

We have a variety of ideas about what our ideal society looks like – some of us have a more nationalist perspective, some a more universalist one, and we come from a variety of places on the conventional left-right political spectrum.

While all of these issues are worth investigating and considering further for ourselves, we are united by the three fundamental points stated above.